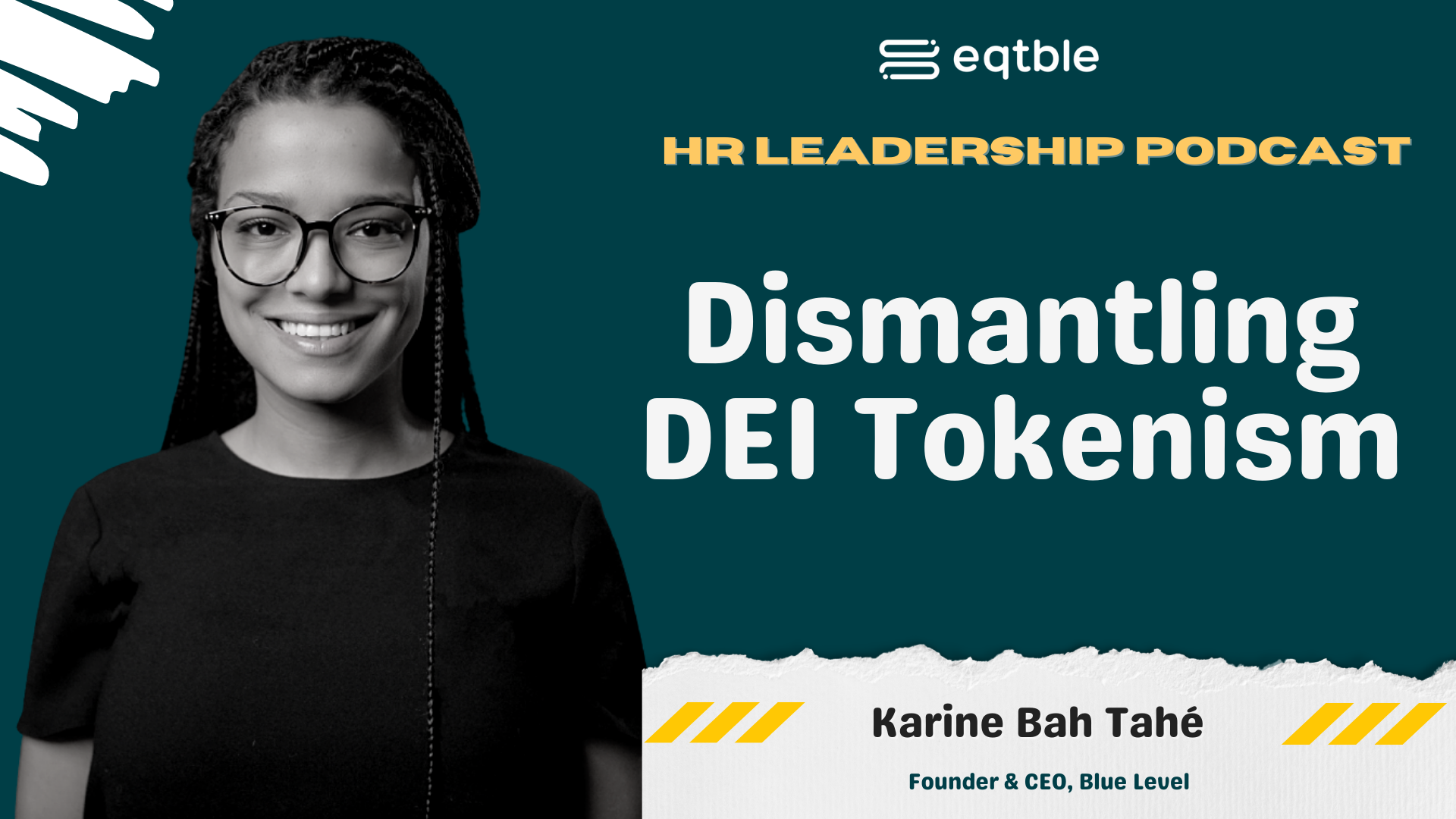 In this episode, Joseph talks to Karine Bah Tahé – a public speaker and one of the world’s foremost experts on diversity, equity and inclusion (DEI). She is the CEO of Blue Level, a global DEI training provider.

Her passion and enthusiasm for fairness is deeply ingrained, and she has been fighting the good fight since she was just six years old.

Karine and Joseph cover a lot of ground in their conversation, and tackle some huge topics; from the experiences that shape our worldview, to effectively combating tokenism in DEI.

Karine’s insight, experience, and candor made this episode one of our most powerful to date. Trust us – you don’t want to miss this one.

Karine has been an activist since the age of six, when she was first exposed to the realities of inequality.

Growing up with a Black father and a white mother, Karine witnessed two sides of the same coin – mingled with the penalty of simply being a woman.

This instilled an incredibly powerful desire for fairness. And so, Karine devoted her life to making the world fairer for everybody, and sought to gain the knowledge that would help her make a difference.

She earned a Bachelor of Commerce degree from Concordia University, and Certificates from Cornell University in Strategic Human Resources Leadership, as well as Diversity and Inclusion.

She also holds an Executive Program Certificate in Human Resources from Stanford University.

Women’s rights, equal pay, diversity, and inclusivity – these have always been her drivers.

She poured that passion into her career, and now has over a decade of experience in training, C-suite diversity and inclusion development, and international business journalism.

Karine is the founder and CEO of Blue Level Training – a Black woman-owned, global training company that aims to build respectful and diverse work environments.

Her work tackles the big picture; diversity, equity and inclusion, and anti-racism. But it also delves deeper, into the less visible world of inclusive communications and microaggressions.

She has worked with international leaders and senior business executives in the United States, Canada, Brazil, Switzerland, Sweden, Germany, India, and Australia.

It was an absolute pleasure to host Karine, and talk about her experiences.

What drives us? Our experiences

There is no question that we all hold biases, and we all hold deep values that shape who we are. But where do these come from? Joseph asks Karine how her worldview came into being.

It was her childhood experiences that gave her a profound sense of right and wrong – of fairness and justice.

“When people were targeting me or my dad, or you know my family members with racism, it was unfair. And so many things were unfair… I became obsessed with fairness.”

And later, as a student, Karine took sociology, where she first learned about the pay gap between men and women.

“They said, ‘men and women do not make this same amount of money for the same job, with the same experience and skills’. And I get up, I go straight in front of the class, I turn around and say, ‘is this a joke?! Please tell me this is a joke!”

Fairness in an increasingly unfair world is what shaped Karine’s worldview, and it continues to drive her appetite for learning and teaching.

The pay gap isn’t as simple as men versus women

When searching for equality, all elements cannot be considered equal.

For instance, Karine gives Joseph the example of women's pay – where on average, a woman makes 81 cents for every dollar a man earns.

But a Black woman makes 81 percent of what a white woman makes. This compounding only becomes evident when you break data down meaningfully, from all-encompassing buckets, into smaller groups.

Related – What are DEI Metrics and how do you measure them?

“That's why you have to break it down, when you look at pay equity… You cannot put all the women in one place.”

Next, Joseph asks what the role of education is in bringing fairness into practice.

Enable education. But be mindful of who’s doing the teaching

This is a core belief for Karine. But the problem, especially in the tech industry, isn't that there is no education – it’s the delivery.

Educating yourself as a leader, as an employee – as a human being – is always a good thing.

But if you’ve learned something, does that then automatically give you the authority or the lived experience to then teach it?

Internal training, delivered by someone who’s studied the facts, is not the same as hearing first-hand the experiences of underrepresented groups.

So, while anyone can learn about unconscious bias and empathy, organizations must be conscious of what qualifies a person to teach it.

Leadership – don’t hoard the knowledge. Share it with your community

One of the biggest risks that Karine has identified is the withholding of knowledge among leadership and senior executives within an organization.

Karine explains that businesses and organizations are communities. If employees have the same information as leaders, everyone can help the organization to achieve its goals.

Empowering everyone means giving them the same knowledge, and recognizing that their contribution matters. It means talking openly about the details, and learning together – as one community.

Further reading – Unconscious Bias and How to Make Hiring Fairer

“It's so easy to say, ‘oh, we're going to do this DEI initiative’, and it goes from that to becoming this tokenism thing… How do we ensure that doesn't happen within organizations?”

Karine first breaks down what tokenism is – a symbolic act without any substantial action.

A box-checking exercise, where (as an example) somebody is hired from an underrepresented group, showcased on all the company’s LinkedIn posts, and heads the “Our Team” page of the website – but has no real sway or decision-making influence.

But on the flipside, there’s the fear of being perceived as making token gestures – and doing nothing as a result. So, her answer is, once again, education; because knowledge is power.

If you educate everyone about what tokenism is, and what real progress looks like, you’ll have the best chance of a successful DEI strategy.

And you’ve got to measure the right things.

Whatever the percentage of underrepresented groups in teams or in leadership positions, the real questions are;

This is the data that separates tokenism in DEI from action – and counts towards true organizational change.

Like what you hear? Get the next episode, as it’s released

One final thank you to Karine – make sure you follow her on LinkedIn and check out her company, Blue Level Training. And when you’re done, subscribe to eqtble’s YouTube Channel, and be the first to hear the latest episode of the HR Leadership Podcast.