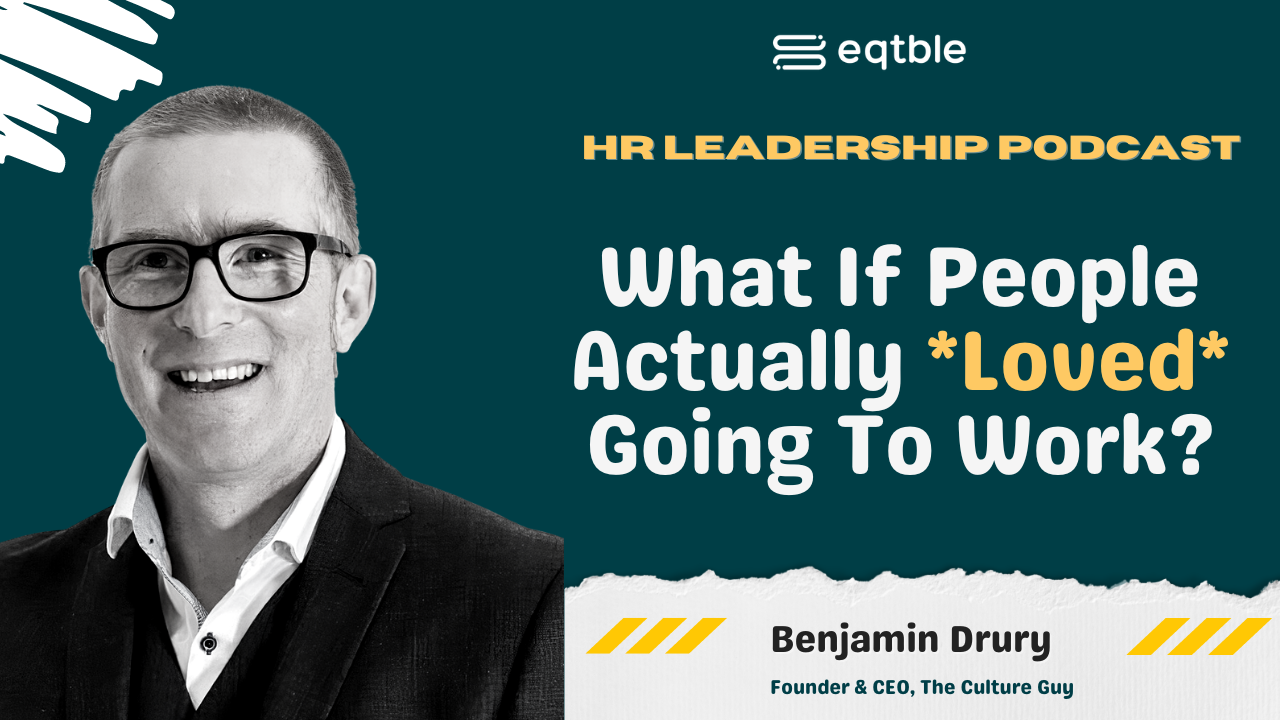 Benjamin Drury - What if people actually *loved* going to work?

This episode features eqtble Co-founders, Joseph and Gabe, in conversation with Benjamin Drury – AKA The Culture Guy.

Benjamin’s excitement and passion drive the flow in this episode, and we were totally inspired by his mission: to create places where people love to work.

This was such an exciting, inspiring conversion – and we’re so glad we got Benjamin on the show.

We think you will be, too.

Learn a little more about Benjamin and where his experience comes from, before diving into this episode.

Benjamin has had quite a career, and although he might argue otherwise, it wouldn’t be a stretch to call him a polymath.

He’s a celebrated keynote speaker, a developer and coder, a trained social worker, serial entrepreneur – and the inventor of Lacemups.

Such a rich, varied set of experiences has made Benjamin wise to every aspect of the world of work and what it takes to lead a successful, sustainable culture.

Hailing from the UK, Benjamin’s career began in IT. He worked on developing one of the early internet banking platforms for a UK bank, from 1995 to 2000, where he gained technical knowledge, and the pioneering “built it” attitude that makes startups grow.

He’s also worked in theater production for 15 years, as a writer and director – which shines through in his public speaking.

He’s been on TV, too. Benjamin appeared on Dragons’ Den (the UK version of Shark Tank), with his invention, Lacemups, which enables kids to tie their shoelaces independently.

He’s built companies, worked as a consultant, written books… And excelled in all of it.

But through all of these twists and turns, Benjamin's career has focused deftly on one thing: defining and building organizational culture. And this is where his deep understanding of people, purpose, and shared passion is his strongest skill.

As The Culture Guy, Benjamin works with entrepreneurs who want to change the world: compassionate, generous, extraordinary leaders – the people who want to use their business as a platform to create a better world, and to make work a place people love to be.

And it’s his rich experience, diverse skill set, and incredible perception that makes all this possible.

Listen in now, and find out what happened when we spoke with him.

This was pretty much the normal attitude towards business before culture and engagement grew in prominence.

And Benjamin was one of the earliest voices who began to challenge the expectations of emotionless, disengaged workplaces:

“...Businesses are just lots of people getting together to do something. Businesses are just relationships with purpose. And so, we need to actually put the emotion back into it if we want people engaged. If we want employees to turn up to work excited to do the job that you're asking them to do, they need to have an emotional connection – and that was quite alien to some people.”

He notes that when business began to take this mindset on, their people flourished and blossomed.

We’ve all seen it, either for real or on Instagram.

An employee lounge with bean bags, a foosball table, arcade machine – or some other arbitrary entertainment device – which loudly proclaims “HEY! Look at how cool we are! Our employees have all this cool stuff to play with!”

If you’ve ever worked somewhere with all this cool stuff, but the wrong culture, you probably noted that the communal space was all but empty most of the time.

Ping pong balls fresh in the box, unopened. The arcade machine, unplugged. Dust collecting on the arms of the fancy leather couches.

Because these things are a symptom of a good culture – not the strategy behind it. And culture, more often than not, comes down to communication.

“The biggest thing that companies fail to do is articulate what they do in a way that people can get excited about.”

Benjamin reframes the idea of what work is.

The same job, seen through the lens of a company mission, is infinitely more inspiring than moving plates taking orders.

But Gabe notes that, while communicating the mission is so important in a company, it’s hard to get right.

“There is often a gap in organizations; they know what they're trying to do, but [the] policies and processes don't quite match up, because [they] haven't gone deep enough to go, ‘what does it mean on a Monday morning, on a Friday afternoon?"

Gabe notes how consistency is hard to maintain as new talent comes in – and the mission and vision gets watered down a little every time.

It's a difficult job to do, and it takes time and energy… You actually have to deliberately go about doing it, grounding that definition of the mission, and the vision, and the values…”

How to build culture in the first stages of a business

Gabe asks the question that startups want to answer the most: “what should I start thinking about in the early stages of building culture for my company?”

Define, as clearly as possible, what you are trying to build and why. Then, set your rules.

“Every company has rules of the game… the lines we will not cross in doing business. If we have to cross these lines, we're going to pack up shop and go home. Those are what we call the core values – the attitudes, the things that really matter. The lines we will not cross in pursuit of what we're trying to do. You've got to make sure that everybody is on the same page…”

Leadership can know themselves, but communicate in ambiguous terms that leave the mission and values open to interpretation.

Communicating, with crystal clarity, what the intentions and rules are makes the acceptance and boundaries of company culture more defined.

Doing this with emotion at the heart – that’s the key. And many leaders, through no fault of their own, fall at this hurdle.

Do you believe in culture fit?

Finally! A frank response to one of recruitment’s biggest questions. But after some laughs, Benjamin explains his thinking:

He looks for what he calls “cultural contribution” – someone who shares the same passion, heart, and values – but will bring more than the company already has. Fitting in is one thing; contributing is quite another.

Joseph wants to know… at what point do companies need to consider this? 10 employees in? 50? Before you even set up shop?!

Well, yes. Ideally, you’ll have a cultural foundation in place before you hire a single person.

Otherwise, how would you know who you needed to hire? But there is a practical alternative that considers the excitement and “just do it” nature of a startup:

Fixing the foundations of culture in established organizations

How do established companies, with hundreds of employees, fix their cultural problems?

“The first and most important thing is communication. We have to get everybody's view on the situation, because the people that talk the least are likely to be the people who've got a few of the answers.”

Companies with a broken culture (and lots of people to take care of) need to create ways to have open conversations about it.

Benjamin explains his most common process for this, which starts with leadership

“We'll have the conversation; what are you trying to build? Let's articulate it in a way that's exciting. What are the values? What are the rules of the game here that we're playing by? And then I will go around the organization, and have exactly the same conversation with lots of other people. And what you'll find is there's overlap… so, some of it's working and some of it's not, but where there's no overlap – that's where the friction points are.”

Once the friction points are known, solutions can begin to appear. Some simple – some hard.

Working on the low hanging fruit, changing the simple things, and doing the “easy” stuff is the best thing to do – not to patch up the real problems, but to build trust.

It’s a sign that change is coming, and that people are being listened to.

It demonstrates change. Without showing that you can be trusted to deliver, the rest can’t be facilitated.

Once you have trust building within the organization, you can begin to talk about the deepest issues openly and meaningfully.

Culture and profit are not mutually exclusive; one feeds the other

Benjamin, Joseph, and Gabe talk about the impact of strong company culture on bottom line – where Benjamin advocates for companies to stop splitting culture from profit.

Even in organizations generating tens of millions of dollars, the performance improvement that can be gained by helping people enjoy their work can be significant.

If you can take a disengaged employee operating at 60%, instill them with a love for their work and they start operating at 80% or more – you’ve effectively improved their productivity by a third.

And you avoid attrition and staff turnover – one of the most expensive operating costs for any business.

Final thoughts: a global company culture – or a local one?

Our last topic, posed by Joseph, is probably the most interesting, but also the most difficult to answer.

How do companies scale culture globally?

The key thing is, we've got to not try and create the same cultures everywhere. We've got to let them contextualize [it] wherever they are… you've got to let your local people decide.”

Culture manifests in different ways in different regions. And, as long as the culture remains true to the core values, that’s okay.

In fact – it’s for the best, because it will be more meaningful to customers internationally.

And that’s a wrap.

We hope you enjoy listening to this episode as much as we enjoyed recording it (we had a lot of laughs on this one!).

A huge thank you to Benjamin for making time for us. Make sure you check him out on LinkedIn, and Google “The Culture Guy” to find his website.

And please don’t miss out on our final episode for this season – subscribe below.

Don’t worry – Season Two of The HR Leadership Podcast is already in development!

Ready for more? Subscribe to The HR Leadership Podcast

Subscribe to eqtble’s YouTube Channel to get notified when the latest episode of the HR Leadership Podcast comes out.